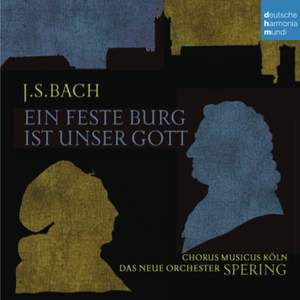 Regarded as one of JS Bach's key works, the cantata Ein feste Burg ist unser Gott is based on the chorale of the same name by Martin Luther, perhaps his best-known. This recording brings together for the first time this most Protestant piece of music in all its variants, giving the listener the chance to tracfe the genesis of the cantata.

In addition to the early version of the work, which has only survived as a fragment, we hear the original cantata by JS Bach. This is juxtaposed with the version most often played today, containing arrangements by Bach's eldest son Wilhelm Friedrich Bach. These versions are framed by two hymns in Latin written for Reformation Day, in which WF Bach reworks to fine effect the two most striking movements from his father's cantata.