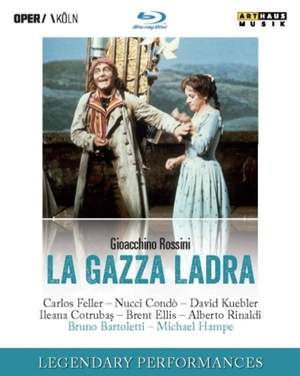 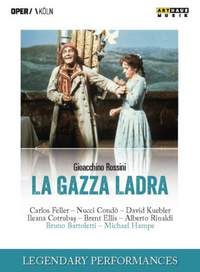 This Cologne Opera production, of one of Rossini’s most brilliant compositions, was directed by Michael Hampe and boasts a star-studded cast with Ileana Cotrubaș, Carlos Feller, David Kuebler and Alberto Rinaldi. Rossini’s opera is a perennial favourite and tells the story of a servant girl, accused of stealing a silver spoon. She is brought to trial by the Justice of the Peace, whose advances she has repulsed, and is condemned to death. Tragedy turns to comedy when, just before the execution is due to take place, it is discovered that the real thief is a magpie. Bruno Bartoletti conducts this lively and colourful production, designed by Mauro Pagano.