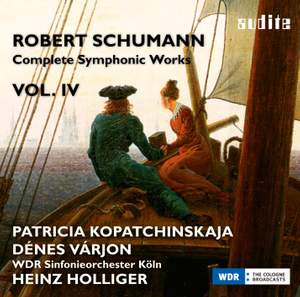 Kopatchinskaja is typically bold and provocative in Schumann’s Violin Concerto…where it works really well is in the slow movement, Kopatchinskaja exposing the fragility of Schumann’s writing... — BBC Music Magazine, July 2016, 4 out of 5 stars More…

This fourth volume of the complete orchestral works by Robert Schumann presents both his most underestimated and his most famous concertos. Patricia Kopatchinskaja takes the experimental qualities of the Violin Concerto, a late work, as a guiding principle, rising above clichéd Romanticist tradition in a typically distinctive, energetic interpretation. This 'de-Romanticised' reading clearly distinguishes Schumann’s Violin Concerto from the glittering Romantic concertos of the time, contrasting brilliant, attention-seeking virtuosity with musical mastery at the service of an overall concept. In the Piano Concerto, Dénes Várjon also expresses a particular Romantic clarity, characterised by fresh sounds and fluid tempi. He trusts in the impact of the work standing on its own by opting for an approach that is not overly Romanticist. His stringent interpretation is informed by many years of performing Schumann, including his chamber works.

Kopatchinskaja’s sound is uncompromising here; stark and straight, her strength matched by the ensemble, no-one’s trying make this into a prettier concerto than it seems, and to my ears, it gains from that approach … you come out of this recording with renewed respect for Schumann’s originality and for Holliger’s determination not to add too much sugar in his Schumann series for Audite