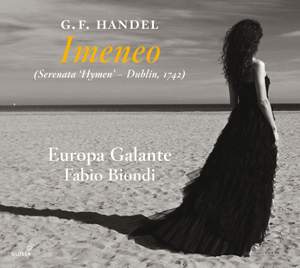 Biondi shapes a performance in which the depth of preparation results in music-making that sounds entirely spontaneous. There's a startling variety of articulation and colour from his tiny band,... — BBC Music Magazine, May 2016, 4 out of 5 stars More…

Fabio Biondi signs his fifth release for Glossa with a vital interpretation of Handel’s late opera 'Imeneo', given in its 1742 Dublin version. If, by this date, the London public was tiring of the Italian opera in which Handel had been excelling for decades, he was still able to call upon divos and divas of the quality of La Francesina and Giovanni Battista Andreoni to perform his music.

Though not a success in its Lincoln’s Inn Fields staging in London, 'Imeneo' was directed by Handel as his only Italian work during his season in Dublin (which also saw the first performance of 'Messiah'), complete with additional arias to add to those praised in 1740 and a pruning of the libretto (which hadn’t received approval). The revised story turns on Tirinto (Ann Hallenberg in Biondi’s modern-day production, as performed at the Handel Festival in Halle) pining for his beloved and kidnapped Rosmene (Monica Piccinini). Her liberation by Imeneo (Magnus Staveland) leads to Rosmene being required to decide which of the two Athenians to wed. 'Hymen' – as Handel’s work was known in Dublin – was the god of marriage, and so, will love overcome duty and reason or not? Fabio Biondi, directing from the violin, brings all his experience in both Italian music and music from the 18th century in delivering a stunning vindication of an unfairly neglected Handel opera.

Biondi shapes a performance in which the depth of preparation results in music-making that sounds entirely spontaneous. There's a startling variety of articulation and colour from his tiny band, and beautifully responsive continuo playing. Ann Hallenberg delivers Tirinto's grave serenades and intricate passagework with unruffled ease and an alluring mellow tone…[and] Magnus Staveland conveys louche glamour in the swashbuckling title role.

The music itself is packed full of discoveries and treasures which often reveal themselves through juxtaposition … The choral work is also typically excellent … In short, this is a breathtaking achievement. It’s the kind of disc that often left me in quiet astonishment not just at its ambition, artistry or skill, but at the way it tries to further the human story and enrich the experience of us all. Bravo!

The cast makes a generally agreeable impression, the trump card being Ann Hallenberg’s Tirinto. I make no apology for once again extolling her merits. From the outset here she envelops the listener in the warm embrace of gloriously expressive tone, alternately touching or delighting, while at the same time demonstrating a command of Handelian style unsurpassed by any singer today.

The orchestra has the odd rough edge, but it fizzes in Imeneo’s jealousy aria, sung with authority by the tenor Magnus Staveland. However, the recording belongs to mezzo Ann Hallenberg as Tirinto; she is in quite another league to the rest of the cast, and the performances lifts whenever she is singing.

Fabio Biondi allows the opera to unfold naturally...Best of all is Fabrizio Beggi, new to me, whose youthful bass copes marvellously, not just with the range demanded of it, but sings with a great sense of lone against very little accompaniment.