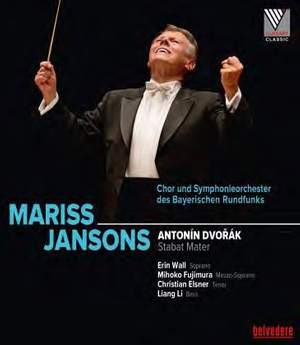 "... stood the mournful Mother weeping" whispers the chorus after the orchestral introduction of Antonín Dvorák 's most celebrated choral work, the Stabat Mater Op. 58. As the work builds to include the four vocal soloists, the obsessively repeated main motif of a descending chromatic line begins to work its magic on the rapt audience.

And under the baton of Mariss Jansons, the Chorus and Symphony Orchestra of the Bayerischer Rundfunk, graced with four superb soloists, take us to a higher sphere of artistry, where hushed tones alternate with glorious fortissimi. Next to a Bruckner symphony performed by Jansons and his ensemble, the Stabat Mater was, in the words of the Neue Zürcher Zeitung, "the second high point of this year's Lucerne Easter Festival," the venue of our concert. Jansons sees within it a broad, profound range of sorrow. Having begun the work in late 1875 / early 1876, but soon set aside, Dvorák returned to it after two tragedies befell him and plunged him into an uncharacteristically melancholic mood: the accidental death of his 11-month-old daughter Rose and the succumbing to smallpox of his three-year-old son Otakar. Yet even stricken with grief, Dvorák could not resist writing simple, folk-like, life-affirming melodies for his luminous Stabat Mater. To master these tragic events, the devout Catholic Dvorák sought comfort and strength in God and in the composition of a work dedicated to the Mother of Sorrows.