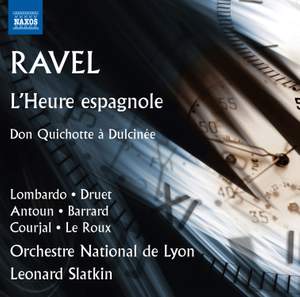 the sound is exquisitely clear and the playing suave from the musky clarinets and ticking clocks of the opening to the sudden flush of hot-to-trot harps…[Druet] captures Concepcion's impatience... — BBC Music Magazine, April 2016, 3 out of 5 stars More…

Maurice Ravel’s stage works are as subtle and expressively poised as can be imagined. In the Spanish-tinged L’Heure espagnole he breathes new life into the Italian genre of the opera buffa, enhancing the comedy in the plot by giving it a gentle human poignancy and poetic presence. The clarity of Ravel’s vocal writing, and his signature harmonic magic and luminous orchestration, make this opera a delight for the ear. Don Quichotte à Dulcinée was Ravel’s last composition, imbuing Cervantes’s famous character with aristocratic Spanish

swagger as well as a kind of heroic tenderness and vulnerability. Ravel’s L’Enfant et les sortilèges from Lyon can be found on Naxos 8660336.

This release follows on from Leonard Slatkin’s acclaimed recording of Ravel’s second opera L’Enfant et les sortilèges and Ma Mère l’Oye (Naxos 8660336), and joins the success of this internationally renowned conductor and the Orchestre National de Lyon in our edition of Ravel’s orchestral music. Gramophone acclaimed Slatkin’s conducting as “shaping the

music with a potent mix of the sensuous, sinuous, sinister and spirited” in volume 1 (8572887), and volume 2 (8572888) was admired for its “splendidly characterised La Valse” by BBC Music Magazine.

Ravel’s operas are both single-act works that have remained popular and regularly performed, keeping them firmly in the public eye while holding a position just beyond the central ground of operatic repertoire.

Leonard Slatkin has brought together a strong cast that includes young rising stars such as the mezzo-soprano Isabelle Druet and experienced voices such as baritone François le Roux, who has the distinction of being considered the natural successor to Gérard Souzay in his performances of the French song repertoire.

This is the first time the Naxos label has recorded both L’Heure espagnole and Don Quichotte à Dulcinée.

the sound is exquisitely clear and the playing suave from the musky clarinets and ticking clocks of the opening to the sudden flush of hot-to-trot harps…[Druet] captures Concepcion's impatience impeccably [and] Luca Lombardo is an ideally knowing Torquemada, perfectly aware of his wife's roving eye.