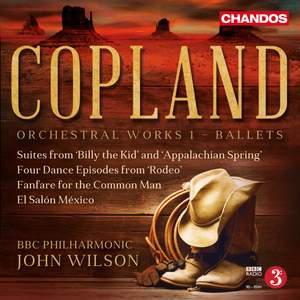 I. Introduction: The Open Prairie

II. Street in a Frontier Town

Katherine listens to the first volume of John Wilson's Copland project with the BBC Philharmonic Orchestra.

For this new series, the conductor, arranger, and light music specialist John Wilson, a BBC Proms favourite, for the first time joins the BBC Philharmonic on Chandos, in orchestral works by Aaron Copland. This first volume features the suites from the American composer’s most famous ballets. Written in 1938, the hugely successful Billy the Kid is a fine illustration of the limpid orchestration and clarity that Copland achieved in works made famous thanks to their popular accessibility. Similarly, four years later, in Appalachian Spring, he created a lastingly influential American soundworld, firmly rooted in the diatonicism of simple folk melodies. A third ‘nationalist’ ballet, Rodeo, and Fanfare for the Common Man were composed in the same year, 1942, the latter being possibly the most instantly recognizable piece in the history of American orchestral music. The energetic dances and national melodies of El Salón México reveals Copland’s other use of folk material, as a musical souvenir of foreign lands that had made an impression of him.

This album was recorded two months after a highly successful concert broadcast live on BBC Radio 3.

John Wilson shows an instinctive flair for Copland's syncopated and changing rhythms, and brings out all the music's broad humour and intimate poetry

Wilson's performances are…impressive, and he secures superb playing from the BBC Philharmonic…the three ballets receive strongly characterised interpretations, as piquant and affecting in the slower passages as they are punchy and ebullient in the faster ones…I enjoyed listening to this disc enormously.

His lifelong immersion in the sound-world of 30s and 40s American music is evident from the off, with the distant trumpets in Fanfare for the Common Man glowing with that vibrato-warmed vintage brass sound that’s so distinctive in his recordings of the great musicals...every single phrase of all the works presented here feels truly balletic, and the music never stops dancing.

Wilson is in his element here, coaxing razzmatazzy playing from the BBC Philharmonic in the rhythmically charged Mexican Dance and battle scene from Billy the Kid, and the Buckaroo Holiday and Hoe-Down from Rodeo. There is tenderness, too, even a touch of Leonard Bernsteinesque wallowing in the unforgettable folksy melodies of Appalachian Spring

The conductor is a natural in Copland’s most celebrated ballet scores: Billy the Kid, Rodeo and Appalachian Spring.