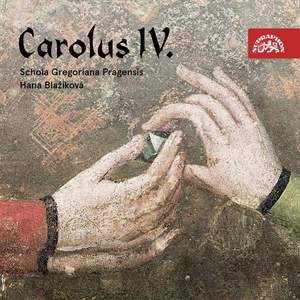 Recorded in the Church of Saint James the Greater, Zbraslav, Prague, September 21-24, 2015

Vocal delivery is uniformly placid, characterful and yet soft-centred, even in the polyphonic sections…instrumental participation is sparing and, in the main, well judged — Gramophone Magazine, September 2016

anon.: A Bundle of Myrrh

anon.: Reading for the feast day of Sts. Cyril and Methodius

From the cathedral, university and street: a fascinating picture of the musical life in Prague under Charles IV.

Under the reign of Charles IV (1316-1378), Prague acquired its magical beauty. The astonishing wealth of art and architecture that originated at the time is evident at first glance, yet the king also attended to the blossoming of the city’s spiritual and cultural life. While St Vitus Cathedral was the most prominent centre of music, variegated genres also flourished at the Prague university (Latin sacred songs and French ars nova) and at the Emmaus Monastery, founded by Charles with the aim of pursuing the Slavonic liturgy. Czech songs (The Bundle of Myrrh, The Wood Clads Itself with Leaves), which linked up to the tradition of German Minnesang, were performed in Prague too. Generally known is Charles IV’s reverence for saints and the attendant passion for collecting relics of holy men. The king even initiated the introduction of the Feast Day of the Holy Lance and Nails, part of whose chant repertoire is featured on this album, recorded by the renowned Schola Gregoriana Pragensis ensemble and the soprano Hana Blažíková. The chants and polyphonic songs are supplemented by secular music, with the result being a fascinating picture of the variegated music performed during the reign of Charles IV, showing all its forms.

Vocal delivery is uniformly placid, characterful and yet soft-centred, even in the polyphonic sections…instrumental participation is sparing and, in the main, well judged