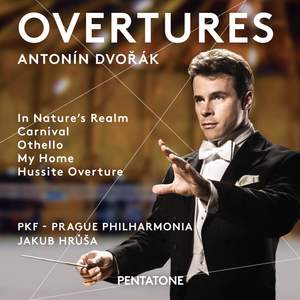 For a large part, thanks to the effort of Johannes Brahms, who introduced him to his publisher Simrock, Czech composer Antonín Dvořák developed into a composer with an international reputation. Don’t we all know his Slavonic Dances, his Symphonies or his chamber music, such as the Dumky Trio or the American string quartet? This album reveals some of the more hidden treasures of Dvořák’s repertoire, namely his overtures, of which he wrote no less than thirteen. In the booklet to the album they are described as follows: All five overtures on this recording are richly and vividly scored, employing palettes of instruments broader on average than those found in Dvořák’s mature symphonies and sometimes calling for special effects. For their orchestral colour but also their rich expression of poetic content, as well as their purely musical invention and structural mastery, these overtures constitute gems of special brilliance in the treasury of Dvořák’s compositional bequest.The PKF – Prague Philharmonia recorded this album in January 2015 at the Forum Karlin in Prague under the baton of their 2009-2015 Music Director and Chief Conductor Jakub Hrůša.

Dvorak initially intended all the pieces to be played in sequence, as here, but they rarely are. The Czech musicians play this music, and the earlier My Home and Hussite, with native zeal: glorious woodwinds evoke Dvorak’s al fresco scene–painting.