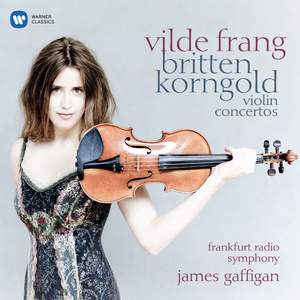 Frang has a beautiful tone and superb intonation, and in both concertos applies a satisfying range of colour - there's much to enjoy, technically speaking. The spiky, lonely atmosphere of the... — BBC Music Magazine, April 2016, 3 out of 5 stars More…

Both concertos on this new disc were written when their composers were in the USA around the time of World War II: the Korngold was completed in 1945, the Britten in 1939. In the course of the 1930s Korngold, an Austrian Jew, had become a prominent Hollywood composer, but could not return to his homeland after 1938; the young Britten, a pacifist, left the UK for New York shortly before the declaration of war in 1939. Both composers had been child prodigies and both concertos are centred around the key of D, the most ‘natural’ key on the violin and the tonal focus for the violin concertos of Beethoven, Brahms, Tchaikovsky and Stravinsky

Frang has a beautiful tone and superb intonation, and in both concertos applies a satisfying range of colour - there's much to enjoy, technically speaking. The spiky, lonely atmosphere of the Britten comes of slightly better than the Korngold…the transparency of the textures controlled by James Gaffigan with sensitive exactitude, everything emerging lustrous, intense and vivid

These are urgently communicative, potentially transformative accounts of scores which, if no longer confined to the fringes of the repertoire, have yet to command universal admiration…playing with almost intimidating dexterity and polish, not to mention impeccable intonation [Frang’s] music-making still manages to project an impression of honesty and naturalness

Frang is unfazed by the difficulties of both works (Britten had to simplify the solo part for its dedicatee, but later restored its technical pyrotechnics), and her keen, penetrating tone never wallows in Korngold’s Rachmaninovian melodies. Indeed, she brings an astringency to the music that one associates with the Stravinskyan piquancy of Britten’s writing. A bold coupling, superbly executed.

[Frang's] sound is superb – icy, fiery, whispered, ultra-rich – and her phrases pour out fearlessly, urgently. It’s a fresh and convincing performance. She couples the Britten with the 1945 wartime concerto by Erich Korngold and doesn’t apologise for its syrupy contours, but also brings out interesting nuances of doubt and fragility. James Gaffigan and the Frankfurt Radio Symphony are robust backers

Though she imbues [the Britten] with searing passion, the expression never seems exaggerated. She reveals the work’s purposeful, steely form yet produces sounds that are as beguiling as her technique is astonishing...Frang’s view of the Korngold Concerto is no less persuasive.