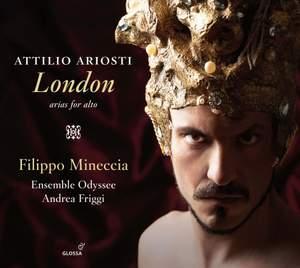 For a composer who has received little attention on record, Ariosti was remarkably successful in his own time as a composer, a performer and as a diplomat (he was a monk too). He was sought after in the courts of Mantua, Berlin, Vienna and Paris before he made his way to London in 1716. There he wrote for singers such as Senesino and Cuzzoni and went on to become one of the three leading composers at the Royal Academy alongside Handel and Giovanni Bononcini.

Filippo Mineccia’s recital includes arias taken from drammi per musica, such as the highly successful 'Caio Marzio Coriolano', 'Vespasiano' and 'Tito Manlio'. Mineccia has quickly become one of the exciting young talents revelling in the vocal demands called of opera seria, whether in live performance or on record: he appeared as Gasparini's Tamerlano on the recent 'Bajazet' [also Glossa] and has also recorded with the likes of Antonio Florio and the late Alan Curtis. Although formed as recently as 2010 Andrea Friggi’s Ensemble Odyssee has quickly established itself with its dynamic interpretations of Italian music from across the 18th century. Friggi also provides us, in the booklet essay, with an insight into the chequered life and compositional variety of Attilio Ariosti.

if you want Ariosti alone this newcomer makes a fine introduction

Mineccia sings with much richness of tone and enviable accuracy in his runs; perhaps a little more light and shade could have been brought to the interpretations, but the music comes across strongly enough. Ensemble Odyssee give stylish and extremely lively orchestral support.

Mineccia’s falsetto occasionally hoots when pressed under increased velocity, and his low notes are not always smoothly incorporated into florid phrases, but he more than makes up for minor blemishes by never producing anything less than total theatrical conviction – and his soft singing in Servilia’s lovely pastoral ‘Aure care’ (from Tito Manlio) suggests that he is rapidly maturing into an expressive and versatile artist

Here’s a new star in the making…this new album of arias, mostly written in London by Handel’s Royal Academy colleague Ariosti, reveals a voice of sensual beauty, especially in [the] languorous arias…[Mineccia's] virtuosity in the bravura numbers is breathtaking