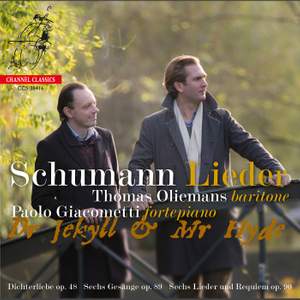 Like Gerald Finley…Oliemans sings the cycle in the past tense, emphasising nostalgia and resignation. But his chosen tempi tend to be even slower, provocatively so in the opening 'Im wunderschönen... — Gramophone Magazine, April 2016 More…

“Two souls, alas, reside within my breast” Faust ascertained, and he was not the first to do so. From time immemorial we have quite some struggle with our inner contradictions, and we try to restrain them in many ways. Knowledge, alchemy, music, literature and drink are just some of the paths we follow in search of clarification and in the hope of gaining mastery of these troublemakers. Through the centuries all this has given rise to many literary and mythological couples: Apollo and Dionysus, Yin and Yang, but Florestan and Eusebius, Schumann’s literary and musical alter egos, are part of this tradition as well. The cautious, gentle Eusebius, as distinct from the more impulsive, high-spirited Florestan, prevail over both the musical and literary oeuvre of Schumann, as a line of approach, a disguise, and an attempt to get a grip on his inner turmoil. In his Dr Jekyll and Mr Hyde (1886) the Scottish writer R.L. Stevenson created two similarly mythical figures in the same vein. But while Schumann (and many before him) entertains the hope or illusion that Florestan and Eusebius will come to terms with one another in a happy ending, Stevenson has the well-meaning doctor Jekyll meet his end through his own evil self: the beastly murderer Mr Hyde.

Like Gerald Finley…Oliemans sings the cycle in the past tense, emphasising nostalgia and resignation. But his chosen tempi tend to be even slower, provocatively so in the opening 'Im wunderschönen Monat Mai', sung as if through a gauze of tears…like Oliemans, pianist Paolo Giacometti can short-change the cycles's scorn and ironic bitterness. But he draws some delicious sonorities from his Conrad Graf fortepiano