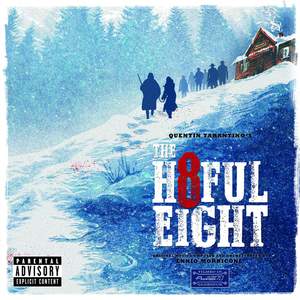 Quentin Tarantino’s The Hateful Eight Original Motion Picture Soundtrack features original compositions from world-renowned, award-winning Italian composer Ennio Morricone. While Tarantino is a lifelong fan of Morricone’s work and has used his music in his past five films, this historic collaboration marks the first time Morricone has recorded original score specifically for one of Tarantino’s films. It is also the first time Morricone has scored a Western film in over 40 years, since the release of the Good, the Bad, and the Ugly.

The Hateful Eight original motion picture soundtrack will be available for purchase on CD, vinyl, and at digital retail worldwide. The Hateful Eight film will be released on December 25, 2015 screening exclusively in glorious Ultra Panavision 70 mm film and will open wide on January 8, 2016.