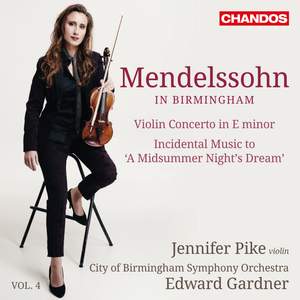 Pike does nothing here to inflame those of an orthodox persuasion and, with her sweet, singing tone and graceful phrasing, walks in the footsteps of many illustrious predecessors…the orchestra,... — BBC Music Magazine, March 2016, 4 out of 5 stars More…

XI. A Dance of Clowns

For this new recording of orchestral works by Mendelssohn, the CBSO and its principal guest conductor, Edward Gardner, join the violinist Jennifer Pike, who made a remarkable debut at Carnegie Hall this year. She here performs the Violin Concerto in E minor, the piece that launched her career thirteen years ago when she became the youngest-ever winner of the BBC Young Musician of the Year Award. Her first album on Chandos (CHAN10667: sonatas by Frank, Debussy, and Ravel) was praised by Classic FM as ‘one of the most outstanding début albums of recent years’. The music of Mendelssohn is probably more highly valued and widely loved today than it has been at any period since his lifetime. Yet one still sometimes hears the allegation that he failed quite to fulfil the promise of those miraculous youthful masterpieces, the Octet, completed at 16, and the Concert Overture A Midsummer Night’s Dream, of a year later. This recording contains two of his later works, which most roundly confute that accusation: the Incidental Music for A Midsummer Night’s Dream (1843), in which he managed to recapture and amplify the unique magic of his early years, and the Violin Concerto in E minor (1844), which has retained its standing among the three or four greatest of its genre ever since.

Pike does nothing here to inflame those of an orthodox persuasion and, with her sweet, singing tone and graceful phrasing, walks in the footsteps of many illustrious predecessors…the orchestra, impeccable in the concerto, continue to play beautifully in the music for A Midsummer Night's Dream

the unflustered cantabile of the work's opening - relaxed, yet in medias res - gives notice that Pike will not court the nervous, even aggressive intensity of [Augustin Hadelich]…the level of fine detail throughout is a credit to the CBSO and Gardner, to the recording team and of course to Mendelssohn, for making every note a telling one.

Pike allies the luminous beauty of her tone to her innate musicality and mercurial technique to produce an exceptionally lyrical interpretation of the evergreen Violin Concerto in E minor.