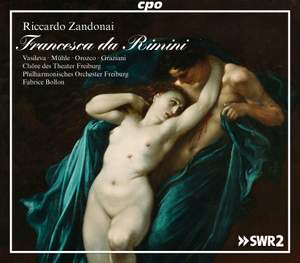 This new CPO set, the first, as far as I’m aware, to present the score uncut, fills an important gap, giving us a well-engineered modern account of the work...But it’s also an excellent achievement... — Gramophone Magazine, January 2016 More…

Act III: No, Smaragdi, no! (Francesca)

It is a story made for the stage: Francesca da Rimini is a deceived woman-in-love who disregards her arranged marriage, decides that she has the perfect right to true love, and ends up murdered.

Dante originally wrote a few verses on this subject, but some decades later Boccaccio expanded the sketch into a tale containing all the ingredients of a genuine tragedy. In 1901 Gabriele D’Annunzio drew on this material to pen a scandalous fin de siècle drama. The music publisher Ricordi recognized this plot’s potential as a music drama and commissioned the young Riccardo Zandonai to compose the music for it. The premiere in 1914 was a sensational success. The music adheres closely to the rhythm of the language and for the rest forms an iridescent backdrop saturated with colour and engaging in intensive depiction of the elements of setting and plot.

This new CPO set, the first, as far as I’m aware, to present the score uncut, fills an important gap, giving us a well-engineered modern account of the work...But it’s also an excellent achievement on its own terms....[the cast] sing powerfully, reliably and impressively. Christina Vasileva’s soprano is up to the challenge of Francesca...Fabrice Bollon conducts the score with a sure touch and is particularly adept at bringing out its moments of beauty.

The title character is a marathon sing; the opera is built around her, and she is on stage for most of it. Christina Vasileva gives unstintingly throughout and shows no signs of fatigue. Her cool, voluptuous voice has a timbre that sometimes recalls Callas, sometimes Scotto, yet she is able to hit and hold the high notes that often emerged imperfectly from those two singers. She is also nicely attuned to the nuances of the text, singing with a wide variety of colour and shading.