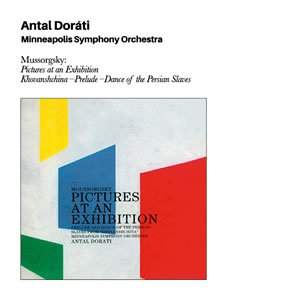 Mussorgsky: Pictures at an Exhibition & Dance of the Persian Slaves

All tracks recorded at Northrop Memorial Auditorium, Minneapolis between April 1959 and April 1960

Mussorgsky: Dance of the Persian Slaves (from Khovanshchina)

One of the most renowned conductors of the twentieth century, the Hungarian born Antal Doráti (1906-1988) became especially well known for his recordings of Tchaikovsky’s music. He was the first conductor to record all three of that composer’s ballets in their entireties. This release contains a complete long unavailable LP (Mercury SR 90217) presenting Doráti’s versions of works by Modest Mussorgsky. He conducts the Minneapolis Symphony Orchestra (later renamed the Minnesota Orchestra), as part of Mercury Records’ celebrated “Living Presence” series. The disc also features bonus tracks with Doráti’s versions of Gunther Schuller’s “Seven Studies on Themes of Paul Klee” (a work commissioned by Doráti and the Minneapolis Symphony Orchestra), and Richard Strauss’ tone poem Don Juan.