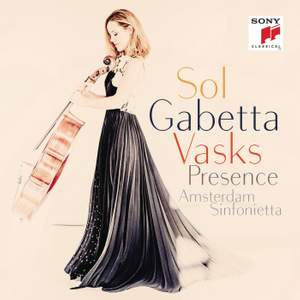 There's a simplicity and immediacy to Vasks's musical languge, not that far removed in character and spirituality to the sound world explored in John Taverner's The Protecting Veil, which makes... — BBC Music Magazine, April 2016, 4 out of 5 stars More…

Vasks: Concerto No. 2 for Cello and String Orchestra, "Klatbutne / Presence"

The main work on this CD is a world premiere-recording of Peteris Vasks’ Concerto No. 2 for Cello and String Orchestra "Klātbūtne / Presence" written for Sol Gabetta and commissioned by the Amsterdam Sinfonietta. Gabetta and the orchestra premiered this work in Amsterdam on October 25th 2012 to critical acclaim. Vasks himself was closely involved in the recording of the concerto for this album, and the piece also temporarily combines Sol‘s cello with her voice in a fascinating manner. Sol Gabetta can be heard singing in the third work of the album “Gramata Cellam”, a 13-minute piece for cello solo that Gabetta has often performed as an encore at her concerts worldwide. The album also includes Vasks’ “Musique du Soir” for cello and organ, which features Sol Gabetta’s mother Irène Timacheff-Gabetta, organ, a professional organ player, performing the organ part. The album was recorded with the Amsterdam Sinfonietta, directed by their leader Candida Thompson.

There's a simplicity and immediacy to Vasks's musical languge, not that far removed in character and spirituality to the sound world explored in John Taverner's The Protecting Veil, which makes works like this Concerto so appealing, particularly when it is performed with such fervour by Gabetta and the Amsterdam Sinfonietta.

[The concerto is] couched, for the most part, in a fearlessly diatonic idiom. Enviable concentration goes hand in hand with a strength, purity and serenity that held me from start to finish…[Presence] receives blisteringly dedicated and stunningly coordinated advocacy…the release as a whole, boasting superlative production values throughout, can still be confidently recommended to Vasks's many fans and newcomers alike

the cello writing suggests an intuitive grasp of the instrument. We surely have the friendship between Vasks and Gabetta to thank for this – she evidently knows how to put across his music exactly the way he intends, and equally he clearly understands how to draw the best out of her with his writing.