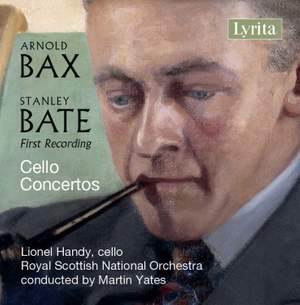 These are excellently delivered by the Royal Scottish National Orchestra under Martin Yates; and if the solo part's technical demands in the very opening stages hint at stretching even Lionel... — BBC Music Magazine, February 2016, 4 out of 5 stars More…

The first of his pieces for solo instrument and orchestra which Bax officially designated a ‘concerto’ was the Cello Concerto of 1932. In the Cello Concerto, the instrument is centre stage virtually from beginning to end and the composer takes great pains to ensure that it is clearly audible at all times. To accomplish this, he uses modest forces: three flutes, two oboes, cor anglais, two clarinets, two bassoons, contrabassoon, four horns, two trumpets, timpani, harp, celesta and strings. By the composer’s usual standards, this orchestration is notably restrained, with an absence of trombones and tuba and only two trumpets, the second of which does not feature at all in the first movement. When supporting the soloist, textures often take on the transparency of chamber music and are varied with such invention and flair (including much creative use of divided strings) that we rarely encounter the same combinatio n of instruments accompanying the cellist for two phrases in succession.

Before he wrote his Cello Concerto in 1953, Bate had produced a couple of instrumental works for cello and piano, consisting of a Recitative, op.52a (1945), and a Fantasy, op.56 (1947). The fluency of his writing in the concerto suggests that the composer had a natural empathy with the solo instrument’s lyrical and declamatory nature. It was premiered in late 1954 by the Eastman Rochester Orchestra at the Eastman School of Music, New York. Compact and sparingly scored, Bate’s concerto maintains the spotlight firmly on the soloist throughout. A sizeable orchestra is rarely exerted at full stretch and then only fleetingly. It is made up of two flutes, two oboes, clarinet, two bassoons, four horns, three trumpets, three trombones, tuba, timpani, cymbals and strings.

These are excellently delivered by the Royal Scottish National Orchestra under Martin Yates; and if the solo part's technical demands in the very opening stages hint at stretching even Lionel Handy's huge expertise, his delivery of the rest of the work is state-of-the-art