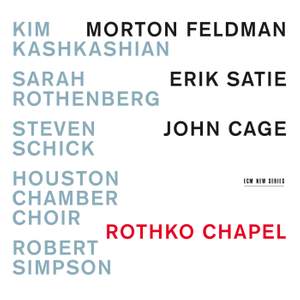 [Rothko Chapel is] a passionate, reverent piece with elegiac playing here from violist Kim Kashkashian – she paints bolder strokes than many dare in Feldman, which is refreshing. The Houston... — The Guardian, 19th November 2015, 4 out of 5 stars More…

Feldman considered that his ‘Rothko Chapel’ lay “between categories, between time and space, between painting and music”, and described the score as his “canvas”. Amongst his most important influences were abstract painters, his friend Mark Rothko prominent amongst them. (Rothko, for his part, yearned to “raise painting to the level of music and poetry”.) Feldman was also liberated by the freewheeling example of John Cage’s work. “The main influence from Cage was a green light,'' Feldman said. ''It was permission, the freedom to do what I wanted.'' Cage, the most relentless of 20th century experimentalists, didn’t acknowledge what he called an “ABC model of ‘influence’” but always had a special fondness for Satie, a musical inventor of good-humoured originality with whom he could identify.

Feldman’s piece was first played in the chapel in 1972. On the 40th anniversary of the opening of the Rothko Chapel in 2011, a concert was held there bringing together works of Feldman, Cage and Satie. This programme was reprised for the present CD with recordings made at other Houston locations - Rice University (Cage, Satie) and the Brown Foundation Performing Arts Theater (Feldman).

[Rothko Chapel is] a passionate, reverent piece with elegiac playing here from violist Kim Kashkashian – she paints bolder strokes than many dare in Feldman, which is refreshing. The Houston choir’s singing is warm and percussionist Steven Schick creates a great sense of space and ritual.