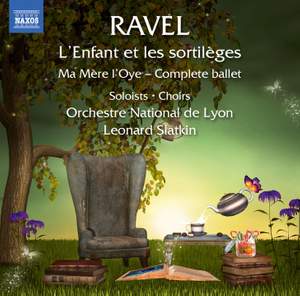 Part I: Votre serviteur, humble Bergere (The Armchair, The Bergere)

Part I: How's your mug? (The Tea Pot, The Chinese Cup)

Part I: Keng-ca-fou, Mah-jong (The Chinese Cup, The Tea Pot)

Part I: Musical duet of mewings (The Black Cat, The White Cat)

Part II: Music of insects, of frogs, of toads, … (Chorus)

Ravel’s opera L’Enfant et les sortilèges captures an imaginative child’s world in which the creatures and objects around him come to life. Wittily portrayed in Colette’s inventive libretto and by Ravel’s meticulous orchestration, furniture, crockery and animals alike are at first provoked by the child’s appalling behaviour, finally helping him after he bandages the squirrel’s paw he had previously pricked with his pen.

The unforgettably enchanting Mother Goose translates well-known fairy tales into music, including the gently melodic Sleeping Beauty’s Pavane, her conversation with the gruffest of beasts, and a final blessing in The Fairy Garden.

Internationally renowned conductor Leonard Slatkin began his musical studies on the violin and studied conducting with his father, followed by training with Walter Susskind at Aspen and Jean Morel at The Juilliard School. He was named music director of the Orchestre National de Lyon in its 2011–2012 season. His more than one hundred recordings have brought seven Grammy Awards and more than sixty Grammy Award nominations. He has received many other honours, including the 2003 National Medal of Arts, France’s Chevalier of the Legion of Honour and the League of American Orchestras’ Gold Baton for service to American music.

The all-French cast articulate the text splendidly, with tenor Jean-Paul Fouchécourt doing his usual superb number as L'Arithmétique. Mezzo Hélène Hebrard as the Child sounds suitably young and fresh, soprano Annick Massis as the Fire negotiates her high coloratura with accuracy and élan