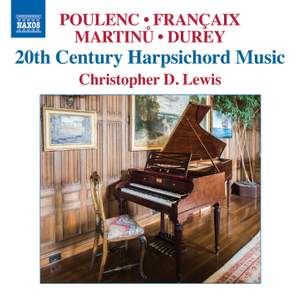 One of the pioneers of the 20th-century resurrection of interest in the harpsichord was the great virtuoso Wanda Landowska, who assisted in the development of a harpsichord built by Pleyel of Paris.

Performing on a 1930s Pleyel harpsichord, Christopher Lewis has chosen a programme of 20th-century works by French or French-based composers. Poulenc’s colourful Suite française is followed by Françaix’s exciting and previously unrecorded Deux Pièces. Martinů’s lyricism and intensity of expression can be heard in the Sonata and other pieces, while Louis Durey’s piquant Dix Inventions is both a homage to Bach’s Two-Part Inventions and a work whose compositional technique is firmly rooted in the modern era.