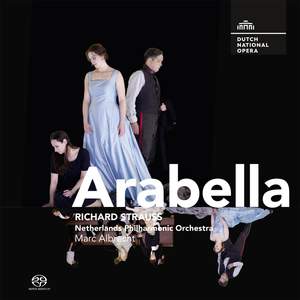 The Dutch National Opera presents this luxurious edition of 'Arabella', the last collaboration between Strauss and von Hoffmanstahl, across 3 Hybrid SACDs, which includes a 200 page booklet. It features a super cast of singers, including Jacquelyn Wagner, Agneta Eichenholz, James Rutherford, Will Hartmann and Susanne Elmark, alongside the Netherlands Philharmonic Orchestra, conducted by Marc Albrecht.

Jacquelyn Wagner here in this recording convinces fom the start. The clarity and diction of the middle soprano range impress…the Netherlands Philharmonic sounds infallibly gorgeous. The balances are superb, fine-textured orchestra warmly embracing the singers on a central soundstage

In Dutch National Opera’s recording just how rewarding this work can be is obvious early on in Agneta Eichenholz’s Zdenka. While persuasively projecting the girl’s despair and frustration, the soprano also brings to her role a voice sufficiently full-toned to be mistaken on occasion for Arabella’s. If not showing the ‘flame’ above the stave of an Anneliese Rothenberger (still my favourite Zdenka), certainly Eichenholz’s sound is always effortlessly produced and firmly focused. The Netherlands Philharmonic is as technically adroit as usual, even if it lacks the ultimate in sheer sumptuousness.