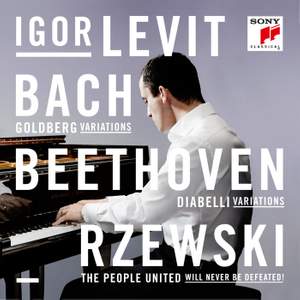 The [Goldberg] Aria sings without affectation as if to emphasise that what follows isn't about the theme but what happens to it...Unstarchy too is Levit's approach to Beethoven's Diabelli Variations...As... — BBC Music Magazine, January 2016, 5 out of 5 stars More…

Rzewski: The People United Will Never Be Defeated!

Var. 8 - With agility, not too much pedal, crisp

Var. 11 - Tempo I. Like fragments of an absent melody, in strict time

Var. 16 - Same tempo as preceding, with fluctuations, much pedal, expansive, with a victorious feeling

Var. 23 - As fast as possible, with some rubato

Recording of the Week,  Igor Levit plays music by Bach, Beethoven, and Rzewski

Following his landmark recordings, "Beethoven - The Late Piano Sonatas" and "Bach - Partitas", both of which has won him international acclaim, Igor Levit is now tackling another three major works: Bach's Goldberg Variations, Beethoven's Diabelli Variations, and Frederic Rzewski's Variations on "The People United Will Never Be Defeated".

It is testament to Igor Levit's invention and the command of his repertoire that in one release he is able to combine arguably two of history’s greatest sets of variations for the keyboard, complete alongside a classic of late 20th century piano music by contemporary composer Frederic Rzewski.

Levit comes with great pedigree when it comes to recording the works of Bach and Beethoven, with his 2013 Beethoven disc winning him the BBC Music Magazine Newcomer of the Year 2014 Award, the Royal Philharmonic Society’s Young Artist Award 2014 and the ECHO 2014 for Solo Recording of the Year. His second recording, J.S. Bach’s Six Partitas in 2014, was Gramophone’s Disc of the Month.

The [Goldberg] Aria sings without affectation as if to emphasise that what follows isn't about the theme but what happens to it...Unstarchy too is Levit's approach to Beethoven's Diabelli Variations...As for the Rzewski, never has 1970s agitprop sounded so compelling...Levit squares up to the exhilarating mix with pitch-perfect acuity and aplomb...Whatever follows, hang on tight: it should prove quite a ride.

There is, if you care to rationalise, a Russian depth of sound and eloquence of phrasing, tempered by Germanic intellectual grasp...Levit’s musical personality is as integrated and mature as his technique. And both of these are placed at the service of the music’s glory rather than his own.

If [the Rzewski] sounds potentially sprawling on paper, in Levit's hands it acquires remarkable coherence and a granite-like majesty...his variety of touch and colours [in the Goldbergs] is such that after the first four variations I found myself checking the booklet to make sure that there wasn't more than one instrument involved: there are sections which sound almost fortepiano-like in their clarity.

few [recordings of the Rzewski] match Levit’s combination of supreme, sometimes breathtaking accuracy and his sustained intensity. The same sense of freshness and discovery runs through his Diabelli Variations...one of the most impressive aspects of the performance as a whole is how Levit holds the different aspects of this massive work in balance

In his recording of Bach's variations, Levit moves between Glenn Gould-like velocity, a sharp sense of period style and a delicacy of nuance and pedalling that evokes a different sort of tradition...As for Rzewski's great variations, Levit's attention to detail and tender lyricism reveal the music's nobility, as well as its anger and blistering energy. In all, this boxed set is a tremendous achievement.

[Levit] has the technical virtuosity and insight to make a magnificent display of the [Rzewski] variations...Even if you don’t subscribe to the agitprop politics, enjoy the immense sweep of one of the late 20th century’s greatest piano works...He characterises [the Diabellis] with rambunctious glee, brilliantly incisive and as nimble as a cat on a high wire, while keeping the music’s overall arch in sight...One imagines Beethoven playing it like this — in his dreams, anyway.

It’s a bold move, placing Mr. Rzewski’s 36 variations on “The People United Will Never Be Defeated!” as an equal partner to Bach’s Goldberg Variations and Beethoven’s Diabellis...Yet this urbane, consuming playing makes the argument persuasive. The Bach and Beethoven are very fine: clean and mature. The Rzewski is inspired...The piano and the man playing it become comrades at arms.