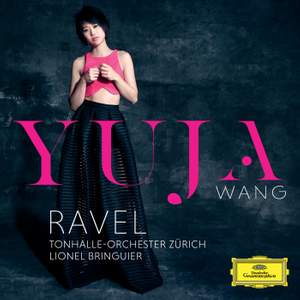 The outer movements are so deliciously light, like the most perfect soufflé, executed with disarming insouciance by pianist and orchestra alike...You could not wish for a more atmospheric account... — Gramophone Magazine, November 2015 More…

Yuja Wang has established herself as an international sensation. She plays with the world’s leading orchestras—including those of New York, London, Amsterdam, and Berlin—regularly joining them on tours of the Americas, Europe, and Asia.

On her eagerly expected new orchestral album she wows with two perennial hits: Ravel’s Piano Concerto in G major and The Piano Concerto for the Left Hand in D major. Both are heavily influenced by jazz, which Ravel had encountered on a concert tour of the United States in 1928. He composed both concertos between 1929 and 1930. The latter was commissioned by the Austrian pianist Paul Wittgenstein, who lost his right arm during World War I.

Yuja, young stellar conductor Lionel Bringuier and celebrated Tonhalle-Orchester Zürich are the perfect match to inflame Ravel’s vibrant sound. The melding of Yuja’s legendary technical skills with her interpretative intelligence transforms this album into a profound musical experience with a haunting and jazzy sound.

The outer movements are so deliciously light, like the most perfect soufflé, executed with disarming insouciance by pianist and orchestra alike...You could not wish for a more atmospheric account of this concerto – nor a more thrilling one...The same applies to the Left Hand Concerto with an opening that is truly sinister.