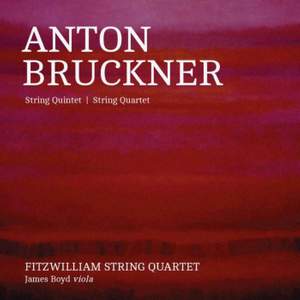 the Fitzwilliam Quartet has been working on this music for a long time. The players have wrestled with its quirks and uncovered its marvels…tender warmth radiates from page after page, dialogue... — BBC Music Magazine, February 2016, 5 out of 5 stars More…

The Fitzwilliam String Quartet, together with violist James Boyd (of the London Haydn Quartet) presents a historically informed performance of Bruckner’s String Quintet and Quartet.

This is the first recording to use gut strings (a special set from Dan Larsen in Minnesota was obtained specially for this recording) and original instruments at the correct pitch for the time.

Having first tackled the Bruckner Quintet nearly forty years ago , the Fitzwilliam’s starting point was achieving the famous ‘Bruckner Sound’ as well as considering tempo, bow strokes, use of vibrato and portamento in the performance.

With many great moments (such as the Adagio) the Quintet is guaranteed an exalted place in the hierarchy of chamber masterworks.

Upon hearing the performance The Bruckner Journal wrote: ‘It was a revelation to hear Bruckner’s quintet played on instruments with this gut string set-up appropriate to the time of its composition, and to hear it performed with a flexible lyricism that has become a rare thing in Bruckner performance.’

The Fitzwilliam String Quartet is among the longest established string quartets in the world.

Now well into its fifth decade, the Fitzwilliam String Quartet is equally at home on both modern and historical instruments.

Founding member Alan George was at the forefront of the period performance movement, playing in John Eliot Gardiner’s Orchestre Révolutionnaire et Romantique for over a decade.

The Fitzwilliam String Quartet first became well known through its close personal association with Dmitri Shostakovich, who entrusted the quartet with the Western premieres of his last three quartets.

the Fitzwilliam Quartet has been working on this music for a long time. The players have wrestled with its quirks and uncovered its marvels…tender warmth radiates from page after page, dialogue between the voices emerges with keen, intimate intensity…all round a fascinating, rewarding disc