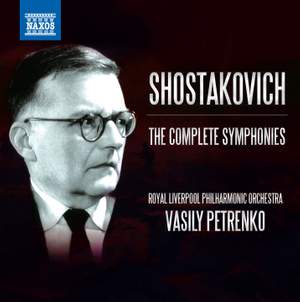 IV. The Dawn of Humanity

I. The Palace Square

II. The 9th of January

VII. At the Sante Prison: Adagio

VIII. The Zaporozhian Cossacks' Reply to the Sultan of Constantinople: Allegro

X. The Death of the Poet: Largo

Each release of Vasily Petrenko’s cycle of Shostakovich’s symphonies with the Royal Liverpool Philharmonic Orchestra created a sensation between volume 1 in 2009 and the final installment in 2014.

The individual recordings remain a leading choice amongst collectors and critics, with for instance the Eighth Symphony (8572392) selected as top recommendation by BBC Radio 3’s ‘Building a Library’ programme in November 2013.

Our box set collections always do well, but this is guaranteed to be at the top of many a Christmas wish list.

There are numerous complete sets of Shostakovich’s remarkable symphonic achievement, but critical acclaim for these recordings has seen this particular set become a modern market leader.