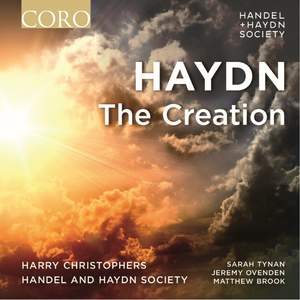 an exceptional account of the oratorio from all points of view…but what is wholly exceptional is the diction of both soloists and choir; you can hear every word without referring to the text... — BBC Music Magazine, February 2016, 5 out of 5 stars More…

2: Pt. 1, The Representation of Chaos

2: Pt. 1, And the Heavenly Host Proclaimed

2: Pt. 1, The Heavens are Telling the Glory of God

2: Pt. 2, And the Angels Struck their Immortal Harps

Inspired by Haydn’s trips to England, where he first heard Handel’s oratorios, The Creation is widely considered Haydn’s crowning masterpiece. Set for three vocal soloists, four-part chorus, and a large Classical orchestra, there seems little doubt that Haydn wanted a big sound (by the standard of his day) for this work. Based on both the biblical Book of Genesis and Milton’s Paradise Lost, the oratorio was premiered in the US by the Handel and Haydn Society in 1819. Harry Christophers says: “Haydn’s music is always a joy to perform but with The Creation he excels himself allowing soloists, chorus and period orchestra to revel in vivid word painting, both vocal and instrumental. Can there be a more consistently happy work than The Creation? Feel free to smile at his genius.”

Handel and Haydn Society is America's oldest continuously operating arts organisation. Its Bicentennial celebration began with the 2014-2015 Season and continues into the 2015-2016 Season. Harry Christophers has been Artistic Director since 2008.

an exceptional account of the oratorio from all points of view…but what is wholly exceptional is the diction of both soloists and choir; you can hear every word without referring to the text printed in the booklet…the choir also impresses with its bright, fresh tone, while the orchestra supplies distinctive colour and vibrancy; their playing is consistently alert

both steeped in tradition and aware of period manners. The choral and orchestral forces are optimum for a piece from the late 18th century, and three stylish British soloists (Sarah Tynan, Jeremy Ovenden, Matthew Brook) make a strong case for a performance sung in English.