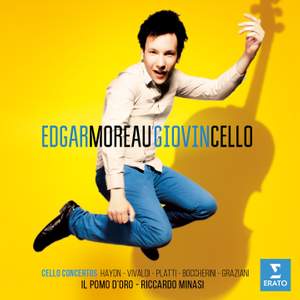 Though the title Giovincello seems to make a specific musical reference, it is simply an affectionate Italian term meaning 'young man'. Only 20 years old when he recorded this album, Edgar Moreau "has already found his place in the great tradition of French cello-playing" (Diapason). Here he brings his youthful energy and virtuosic thrills to 18th-century cello concertos by Haydn, Vivaldi, Boccherini, Platti, and the world-premiere recording of a Baroque concerto by Carlo Graziani.

The centrepiece of Giovincello is Haydn's Cello Concerto No 1 in C major, which is joined by Vivaldi's Concerto in A minor RV 419 and three concertos by somewhat lesser-known Italian composers of the 18th century who all made careers outside their native country: Luigi Boccherini (1743-1805) - an important figure in the history of chamber music - who spent much of his life in Spain; Giovanni Platti (1697-1763), who lived for more than 40 years in Würzburg in Bavaria, and Carlo Graziani (.-1787), a somewhat shadowy figure who became cello teacher to Frederick Wilhelm II of Prussia and whose Cello Concerto in C Major is given its world-premiere recording here.

Moreau’s ‘giovincello’ qualities are what this disc is all about. The balance is engineered so as to place his singing, silkily intense and muscular tone absolutely in the foreground, along with the sound of his fingerboard and his gasps of exertion.