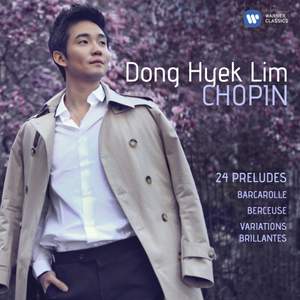 Each of the Preludes is vividly characterised, with Lim running the gamut between dark turbulence and pastoral tranquility with absolute assurance. He doesn't waste energy trying to find novel... — BBC Music Magazine, February 2016, 5 out of 5 stars More…

Dong Hyek Lim, whose international career now extends to some 15 years, is a pianist whose understanding of the repertoire has been honed through studies in his native Korea, in Russia and in the USA. Originally a protégé of Martha Argerich, he returns to Warner Classics with a programme devoted to the music of Chopin.

His new recital of works by Chopin, centred on the set of 24 Preludes, continues a relationship with the label that goes back to 2002. Lim, then just 18 years old, was introduced to the world with a CD in the ‘Martha Argerich Presents’ series. Gramophone noted his arrival “in a blaze of pianistic glory”, while in France, the album was awarded the prestigious Diapason d’Or. It was followed in 2008 with an album of Bach’s Goldberg Variations coupled with the Bach-Busoni Chaconne. The French magazine Le Monde de la Musique awarded it a ‘Choc’, while Gramophone wrote that: “There’s no question that he’s a very impressive pianist … [who gives] the sense of profound pleasure in the music … And he’s not afraid to experiment with what he can do in this music … An artist to watch.”

Dong Hyek Lim was born in Seoul in 1984 and began his musical training at the National Korean Conservatory. At the age of 10 he moved to Russia as the youngest-ever student to attend the Moscow Conservatory, where his teacher was Lev Naumov (a pupil of the legendary Heinrich Neuhaus). Lim later moved to Germany to study at Hannover’s Hochschule für Musik with Arie Vardi. In 2001, aged just 15, he became the youngest-ever winner of the Premier Grand Prix at the Concours Long-Thibaud-Crespin. He was also a prizewinner at the Concorso Busoni (2000), the Hamamatsu International Piano Competition (2001), Queen Elisabeth Competition (2003), International Chopin Competition (2005), and the International Tchaikovsky Competition (2007). Since then, Lim has continued to study – notably with Emmanuel Ax at the Juilliard School in New York – and he himself recognises that he has reached new levels of maturity.

Dong Hyek Lim has performed at many of the world’s great concert halls, including Lincoln Center in New York, Walt Disney Hall in Los Angeles, Wigmore Hall in London, the Salle Pleyel and Théâtre des Champs-Élysées in Paris, the Konzerthaus in Berlin, the Palais des Beaux-Arts in Brussels, the Tonhalle in Zurich, the Small and Great Halls of the Moscow State Conservatory, the Łazienki Palace in Warsaw, the Mann Auditorium in Tel Aviv, and, in Japan, Suntory Hall and the Osaka Philharmonic Hall. He has made festival appearances at Verbier, the Chopin Festival, the Ruhr Piano Festival, La Roque d'Anthéron, Montpellier Radio France, the Jacobins Festival (Toulouse) and at Martha Argerich’s festivals in Lugano and Beppu (Japan).

Each of the Preludes is vividly characterised, with Lim running the gamut between dark turbulence and pastoral tranquility with absolute assurance. He doesn't waste energy trying to find novel approaches - he just lets the music speak, exercising restraint where other young pianists take showy liberties; I've seldom hear the Raindrop Prelude rendered with such persuasive grace

His approach might best be described as close reading: Chopin’s markings are observed to the letter, including impeccable phrasing that lives and breathes. Unrushed tempi and sparse pedalling reveal a wealth of detail...Lim’s Preludes alone are worth the purchase price.