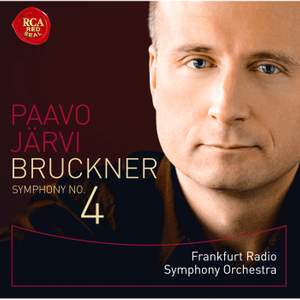 In the CD booklet, Järvi explains that he perceives the symphony as being lighter and sunnier than its companions and seeks to avoid the traditional monumental approach to Bruckner interpretation.... — Gramophone Magazine, September 2015 More…

This is the fourth volume of the on-going recording project of Bruckner’s complete Symphonies by Paavo Järvi and Frankfurt Radio Symphony Orchestra. Bruckner’s Symphony No. 4 has a nickname of “Romantic”, and has been one of the most popular symphonies among Bruckner’s entire orchestral works. As so often in Bruckner’s case, the Symphony No. 4 metamorphosed over a period of many years and in the end comprised several versions. However, the Fourth Symphony was especially tortuous. Today, the second version of 1878–80 has become the most prevalent in performance, and Paavo Järvi also uses this version, with a few modifications based on the first print. Recorded live in Alte Oper in Frankfurt and edited from multiple performances, this new recording presents fresh view on Bruckner’s masterpiece by Paavo Järvi. Grammy award winning Paavo Järvi is now in his fifth season as Music Director of the Orchestre de Paris and this January conducts the opening concerts of the new Philharmonie de Paris, where the orchestra will be the main resident ensemble.

In the CD booklet, Järvi explains that he perceives the symphony as being lighter and sunnier than its companions and seeks to avoid the traditional monumental approach to Bruckner interpretation. The result involves slightly faster tempi than usual in the first two movements but also a convincing sense of power and depth.