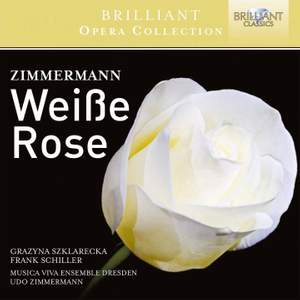 Udo Zimmermann’s opera Weisse Rose is one of the most powerful and moving dramatic works of the 20th century. It features a brother and sister waiting their execution under Nazi prosecution, a bitter and poignant message of human courage and life force against brutal power and nihilism. The scoring of two vocal soloists and 16 instrumentalists provides an extreme range of expression, from the wild dissonances and weird effects depicting the evil, and the elegiac moods of soul searching humanity and resignation.

An authoritative performance from 1986, conducted by the composer himself, with the two highly impressive vocal soloists Grazyna Szklarecka and Frank Schiller.