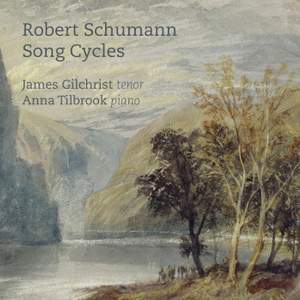 [Gilchrist and Tilbrook] allow each cycle to unfold naturally, minutely adjusting the spaces between certain songs to allow the ear to absorb what it has just heard…Tilbrook's navigation of the... — BBC Music Magazine, December 2015 More…

Liederkreis shows Schumann at his most lyrical and deeply romantic; incredibly Op.24 was his first published vocal composition. Dichterliebe,Schumann's best-known song cycle, is regarded as one of the finest in the German language, notable for its perfect pairing of Heinrich Heine's poetry with Schumann's music.

James Gilchrist has appeared with many of the world's most prestigious ensembles and under several leading conductors at venues including Wigmore Hall, Snape Maltings and Perth Concert Hall. James is sought after for operatic roles, ensemble performances and as a respected recitalist. On both concert platform and operatic stage, his repertory ranges from Monteverdi to new commissions, and he has appeared with, among others, the Sixteen, the Academy of Ancient Music, the Royal Concertgebouw Orchestra and English National Opera. James has previously recorded works by Gerald Finzi, Ralph Vaughan Williams Kenneth Leighton, Ivor Gurney, Arthur Bliss and Peter Warlock and has uncovered the beautiful songs of Muriel Herbert.

Anna Tilbrook is one of Britain's most exciting pianists, with a considerable reputation in song recitals and chamber music. She made her debut at Wigmore Hall in 1999 and has since become a regular performer at Europe's major concert halls and festivals.

[Gilchrist and Tilbrook] allow each cycle to unfold naturally, minutely adjusting the spaces between certain songs to allow the ear to absorb what it has just heard…Tilbrook's navigation of the playouts, those final bars in which it seems that Schumann is communicating something too profound for mere words, is unfailingly lovely, her accompaniments clearly articulated and self-effacing…[Gilchrist] is fearlessly expressive.

Gilchrist sets the mood from the start, entering the world of the Op. 24 Liederkreis with a soft touch and confiding tone…in the Op. 39 Liederkreis Gilchrist's light tenor is good at painting the moonlit night of 'Mondnacht' and the more ominous twilight of 'Zwielight'…his Dichterliebe is the cycle of a kindly poet, who…shapes phrases that gently unfurl in the light of a summer morning. In all this he is well supported by the clean-cut, carefully detailed playing of Tilbrook, who modestly leaves any point-making to the singer.