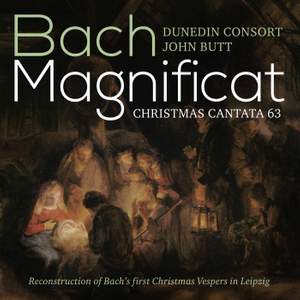 This is the premiere recording of J.S. Bach's Magnificat heard for the first time within its original liturgical context, alongside the beautiful Christmas Cantata. The first 1000 copies of the disc will also include a free bonus disc of highlights from the Consort’s Gramophone Award-winning seasonal favourite ‘Handel: Messiah’.

Dunedin Consort recreates Bach's first Christmas at Leipzig (Vespers in the Nikolaikirche, 25 December 1723); the recording opens with a Gabrieli motet and includes organ preludes and a seasonal congregational chorale.

Director John Butt has given listeners an interpretation that will provide a refreshing outlook on this masterpiece and will show the Magnificat in a completely new light.This recording marks the return of Dunedin Consort's star-studded cast including, Nicholas Mulroy, Matthew Brook, Joanne Lunn and Clare Wilkinson plus newcomer Julia Doyle.

Butt's liturguical reconstruction of Bach's John Passion was named a Critics Choice by BBC Radio 3 CD Review and Gramophone, as well as being named Recording of the Month by three separate publications.

In addition to a GRAMMY nomination, Dunedin Consort has won two Gramophone Awards: the 2007 Baroque Vocal Award for Handel: Messiah and the 2014 Choral Award for Mozart: Requiem .Further accolades include: Esther was voted one of the Top 10 Classical Albums of 2012 by The Times, 2011 saw them included in Gramophone's Twenty Greatest Choirs list and its recording of Bach's Matthew Passion was named Building A Library: First Choice by BBC Radio 3 CD Review , whilst Six Brandenburg Concertos was named Gramophone Choice and awarded five stars by both BBC Music and The Guardian.

It’s an absolute joy – far too good to keep for Christmas.

Another intriguing and excellently performed project from Butt and his Dunedin Consort...As usual the forces are small-scale, save for two lusty congregational hymns (adorned with enjoyably headstrong organ improvisations). The Magnificat itself is exciting, fresh and faultlessly paced.

This is one of the most enjoyable and stimulating Bach discs to have come my way since … well, since John Butt’s account of the Johannes-Passion. The performance standards are uniformly excellent and the music is life-enhancing… I’m in no doubt that I shall be listening to this superb disc at some stage on Christmas morning.

There are interesting textual changes, the playing and singing are terrific, and Butt creates a very convincing congregational hymn with organ flourishes. But the highlight of the disc is the Christmas Cantata 63, brilliantly done with such expressive exuberance that it should have had (but certainly did not) the Leipzigers dancing in the aisles with joy at the arrival of their new Kapellmeister.

Another bull’s-eye hit from John Butt’s Dunedin Consort… interesting textual changes, the playing and singing are terrific, and Butt creates a very convincing congregational hymn with organ flourishes… the highlight of the disc is the Christmas Cantata 63, brilliantly done with such expressive exuberance.

This is yet another astonishing triumph by Professor John Butt and his Dunedin Consort. Scholarly originality is the clincher: a reconstruction of Bach’s first Christmas Vespers in Leipzig with the wonderful Magnificat as central focus...The musicianship is exquisite; the emotional impact is immediate.

a very good example of John Butt’s marriage between arresting scholarship, enormous musicality – the tempi are so naturally right – and pragmatic skills: conceiving and bringing such a complex production to fruition is a huge task, and the whole disc is so coherently musical from the word go. Give it to all your friends for Christmas: this is contextual Bach at its very best.

With just 10 voices and an orchestra not quite double that in number (four of them trumpets) the scene is set for music-making that’s lucid and festive, captured in sound that’s both intimate and full. A spirited Christmas celebration with a difference.