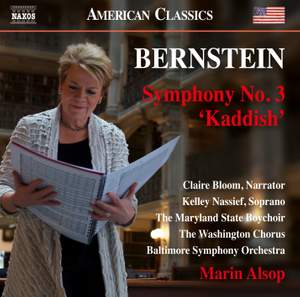 Claire Bloom delivers [Kaddish] in a calm, inward manner, as if at prayer, without the fierce anger generated on Bernstein's first recording…despite assured, purposeful contributions by the choirs... — BBC Music Magazine, November 2015 More…

Bernstein: The Lark (2012 concert version with narrator by N.G. Lew and M. Alsop)

Three examples of Leonard Bernstein’s vocal art can be heard in this recording. His Symphony No. 3 ‘Kaddish’ shuns traditional symphonic ideas in favor of an eclectic theatrical and oratorio-like form with a prominent rôle for speaker. For this recording Marin Alsop has returned to the work’s original narrative text, heard before the 1977 revision. The Lark – heard in a concert version with added narration – derives from Lillian Hellman’s adaptation of L’Alouette on the life of Joan of Arc, and it was this music that Bernstein reworked into his Missa Brevis many years later.

Marin Alsop is a Bernstein protégé, and has written fondly and extensively about studying with him. He mentored her when he was conductor of the New York Philharmonic and few conductors today understand his music better. This disc presents Bernstein the vocal composer performed inlargely original editions by one of his best contemporary interpreters. The speaker in Kaddish is the great actress Claire Bloom.

Claire Bloom delivers [Kaddish] in a calm, inward manner, as if at prayer, without the fierce anger generated on Bernstein's first recording…despite assured, purposeful contributions by the choirs and Alsop's excellent Baltimore Symphony Orchestra, the narration's gentleness of tone nullifies an essential element of the work

[Kaddish is] recorded here in a performance of great conviction from Marin Alsop, with the wonderful Claire Bloom achieving a happy medium between the declamatory and the confidential…there are instances of pure gold - a consoling lullaby at the heart of the piece (featuring limpid soprano Kelley Nassief) which Bernstein called his 'Pietà'.

Alsop’s account of the Kaddish outclasses the composer’s second recording (DG) with Montserrat Caballé and the Israel Philharmonic...The piece itself seems to grow in stature, and the conductor’s Baltimore forces perform with blazing conviction.

Alsop gets colour and intensity from the orchestra, but the singing voices are far back in the mix and sound thin. In the other works, the energetic São Paulo Symphony Choir emerges more impressively.