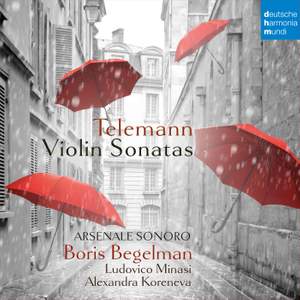 Boris Begelman unlocks the vibrancy of music that on paper might look a little plain, achieving the feat partly through generous and stylish ornamentation and partly through a level of imagination... — Gramophone Magazine, November 2015 More…

Telemann: Fantasia for Violin Solo in B Minor, TWV 40:22

Telemann: Sonata for Violin and Basso Continuo in A Major, TWV 41:A1

DHM & Sony Classical releaset his program with works for baroque violin reveals Telemann as an accomplished and fastidious craftsman, with an acute sense of effective colour and an ability to blend stylistically divergent features into a fluent and satisfying whole. The performances by Boris Begelman are characteristically energetic and stylish. Four out of eight works from the album are world premiere recordings. Liner notes by Boris Begelman about the ornamentation and embellishment of the melody as one of the most interesting aspects of the 18th century music performance.

Boris Begelman unlocks the vibrancy of music that on paper might look a little plain, achieving the feat partly through generous and stylish ornamentation and partly through a level of imagination and engagement that is consistently high and avoids any feeling of routine - the essence of good Baroque music-making…all of which makes this a thoroughly worthwhile addition to the ever-growing Telemann discography

This young group — two Russians and an Italian – show with tremendous technical eclat and interpretative flair what an inventive composer Telemann was, even if he owes much to Corelli. These bold performances underline his inspiration from folk music, too. Definitely worth a flutter.