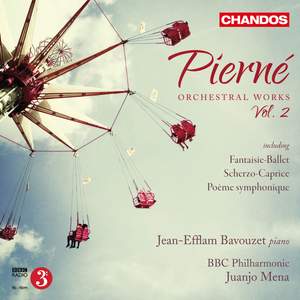 Bavouzet is a convincing and enthusiastic advocate, sparkling in the Scherzo-Caprice, calmly noble at the opening of the Poeme symphonique and negotiating the abrupt turns of mood in the Fantasie-ballet... — BBC Music Magazine, December 2015 More…

This is the eagerly awaited second volume of orchestral works by Pierné, played by the BBC Philharmonic under Juanjo Mena and featuring Jean- Efflam Bavouzet. The first volume, released five yearsago, was a delectable aperitif (American Record Review).

More successful than his older rival Debussy in the early twentieth century, the composer Pierné deserves to be better known nowadays. This recording features some of his most virtuosic and yet mysterious pieces, placing him at the frontier between romantic (Liszt, Saint-Saëns, Franck) and contemporary impressionist (Ravel, Debussy) influences.

Jean-Efflam Bavouzet, who is often praised for his expressive power and fine technique, here takes on the challenge of bringing such gems as the Fantaisie- Ballet or Poème Symphonique to much-deserved fame. Cathédrales and Paysages franciscains are later works (1915 and 1919 respectively), and while the former evokes scenes of devastation from WW I, the latter offers more airy and impressionist music with obvious signs of modern influences.

Bavouzet is a convincing and enthusiastic advocate, sparkling in the Scherzo-Caprice, calmly noble at the opening of the Poeme symphonique and negotiating the abrupt turns of mood in the Fantasie-ballet with ease…the highlight and revelation of the disc, though, is the suite Paysages franciscains from 1919

[These pieces] all repay hearing, especially in these dynamic performances by Jean-Efflam Bavouzet and the BBC Philharmonic, but perhaps even more interesting is the way Pierné's creative stance shifted from gifted though fairly anonymous works towards more personal Impressionist tendencies.

These pieces are pleasant, wonderfully fluent but ultimately unremarkable examples of French late romanticism...Bavouzet is not only a dazzling soloist in the three concertante works, but adds two of Pierné’s solo piano pieces, the Nocturne en Forme de Valse and a concert study, for good measure.