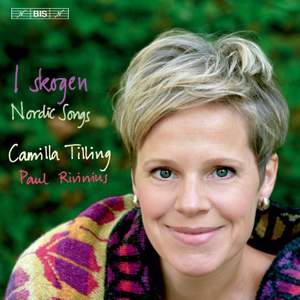 Camilla Tilling uses her light lyric soprano to trace the echoes and glints of folksong in the melodic shape and harmonic underpinning of many of these songs of the North. Minimal vibrato and... — BBC Music Magazine, December 2015 More…

No. 5. Zur Rosenzeit (The time of roses)

Known to opera audiences worldwide, Camilla Tilling is also a dedicated recitalist. On two previous BIS releases, the Swedish soprano and her musical partner Paul Rivinius have interpreted Strauss as well as Schubert, to critical acclaim: 'Tilling takes her place among the leading Strauss sopranos of the day' (Sunday Times); 'a Schubert recital of rare pedigree' (Gramophone). On her present offering she turns northwards, interpreting songs by Grieg, Sibelius and Wilhelm Stenhammar. The disc takes its title from an early song by Stenhammar, I skogen (‘In the forest’), and many of the selected songs are either played out in or depict natural settings, in a manner we are familiar with from Nordic composers. Stenhammar's contributions are all settings of poems in Swedish, but even though Sibelius and Grieg are represented mainly with settings of German texts – with the notable exceptions of Grieg's emblematic En Svane (‘A Swan’) and Sibelius's Norden (‘The North’) and Skogsrået (‘The Wood-Nymph’) – a tendency to give nature a musical leading role is evident. The programme closes with a single song by Hugo Alfvén – Skogen sover (‘The forest sleeps’).

Camilla Tilling uses her light lyric soprano to trace the echoes and glints of folksong in the melodic shape and harmonic underpinning of many of these songs of the North. Minimal vibrato and long lines of pure and focused cantabile bring high-latitude light to Sibelius's setting of his beloved poet Runeberg, and give voice to both his far from mute swans in Norden, and those of Grieg and Ibsen in En svane.

Throughout these songs, and in the following mood portraits of Tilling's compatriot Stenhammar, there is fine use of dynamics by a singer and pianist who have clearly worked closely on the texts. As a Lieder singer Tilling thinks through her material - she's compelling story-teller as much as decorative word-painter. She also manages en route a remarkably clean and unhackneyed 'En svane'.

His Six German Songs Op 50 and Grieg’s Op 48 set – two of which were Schwarzkopf favourites – are the “meat” here, but the rare Swedish songs, gorgeously sung, are welcome.