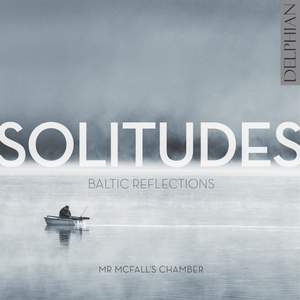 Full marks for originailty of concept and for execution, which has all this ensemble's trademark style and communicative nous, and for a fascinating booklet-note by Ivan Moody.ode12732 — Gramophone Magazine, September 2015 More…

No one knows quite when tango was established in Finland, but the style has a long history there – still little known to outsiders – and combines rhythmic interest and yearning melody with a distinctively Nordic melancholy. In this ingeniously curated programme, two Finnish tangos from the 1950s and a tango-based work by Finnish classical composer Aulis Sallinen are woven into a bold tapestry of music from the Eastern Baltic seaboard. Longing, sadness, and a heightened sense of nature infuse all of these works, which also reveal intriguing stylistic connections: the rocking accompaniment of Sibelius’ 'Einsames Lied' seems to prefigure the ‘Baltic minimalism’ of Vasks, Pärt and Zita Bružaité, while Olli Mustonen’s 'Toccata' alternates rhythmic verve with a rich vein of reflective memory. These original compositions are complemented by Robert McFall’s own sensitive arrangements, for a core McFall’s lineup of five strings and piano, and the programme culminates in a truly unique version of Sibelius’s famous 'Finlandia' Hymn. Mr McFall’s Chamber has collaborated with a number of singer/songwriters, including Michael Marra and Valentina Montoya Martínez (both of whom have recorded CDs for Delphian with the group). It is also dedicated to commissioning new work from both well-known and unknown composers, and has premiered and toured pieces by James MacMillan, Gavin Bryars, Eddie McGuire, Kenneth Dempster, Cecilia MacDowall, Chick Lyall, Phil Bancroft, Fraser Fifield, Tim Garland and many more. Two McFall’s commissions, Martin Suckling’s 'What shall I give?' and Martin Kershaw’s 'Closing In', were both shortlisted as finalists for the 2011 BASCA British Composer Awards.

Full marks for originailty of concept and for execution, which has all this ensemble's trademark style and communicative nous, and for a fascinating booklet-note by Ivan Moody.ode12732

An imaginatively chosen, beautifully recorded programme starting and finishing in Finland … Performances do full justice to the project in a disc that is well worth exploring.