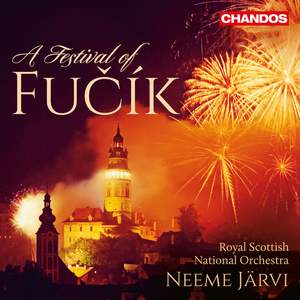 Järvi and the Royal Scottish National Orchestra deliver this excellently recorded anthology with great enthusiasm, throwing themselves into these brightly coloured scores without a hint of condescension... — BBC Music Magazine, December 2015 More…

Fucik: Entry of the Gladiators

Thirty years after having recorded Dvořák’s complete Symphonies on Chandos, the Royal Scottish National Orchestra and its laureate conductor Neeme Järvi tackle another romantic Czech composer: Julius Fučík, famous for his more than 400 polkas, marches, and waltzes, some of the best of which are featured here.

Fučík studied violin in his early years, switching later to the bassoon, with a subsidiary in percussion and timpani. Playing in Austrian regiments, he gained invaluable experience of writing for military band and became a very prolific composer of marches. The most famous of these is of course Entry of the Gladiators, completed in 1899 and performed throughout the world ever since.

Full of energetic, effervescent Bohemian crossrhythms, tuneful brass melodies (often now associated with a circus atmosphere), but also more lyrical expressions, this album is a festival in itself.

Järvi and the Royal Scottish National Orchestra deliver this excellently recorded anthology with great enthusiasm, throwing themselves into these brightly coloured scores without a hint of condescension or irony…this is a highly enjoyable reminder of the delights of Romanticism's popular side.

Nicely crafted and highly enjoyable music, played with all the life and fizz it requires by Järvi and his Scottish-based colleagues. What he lacks in memorable melody he makes up for with swagger, immense charm and foot-tapping brio – and, my goodness, this career bandmaster certainly knew how to orchestrate. The sound picture is a Chandos spectacular.