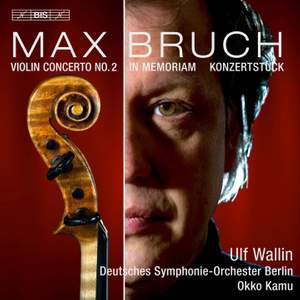 Bruch: Works for Violin and Orchestra

A highly versatile musician, Ulf Wallin has recorded a succession of discs for BIS, including music by Schoenberg, Schnittke, Janacek and Hindemith. Lately he has focussed on Romantic composers, resulting in an acclaimed recording of Schumann's complete works for violin and orchestra (Daily Telegraph: 'It’s hard to imagine more sympathetic and insightful performances of these wonderful pieces'). Supported by the eminent Deutsches Symphonie-Orchester Berlin conducted by Okko Kamu, Wallin now offers a programme spanning some 30 years of the long career of Max Bruch. 10 years after he penned his first Violin Concerto, Bruch, on hearing a performance given by Pablo de Sarasate, embarked on his Second Violin Concerto in 1877, which he would later dedicate to the virtuoso. Some fifteen years later, it was to Joseph Joachim that Bruch dedicated In Memoriam, a single movement work to which the composer declined suggestions to add additional movements on the basis that the work was perfectly complete as it was. In contrast, the Konzertstück from 1910 was originally planned as another violin concerto, but in the end developed into a work in two movements, the second one based on the Irish folk song The Little Red Lark.

Ulf Wallin gives a dramatic, passionate reading of Bruch's Second Concerto, aided by a fine, spacious recording and strong, well-integrated orchestral playing…he also makes an excellent case for the late Konzertstück with a virtuoso account of the impassioned first movement…if this particular selection of Bruch's concertante works appeals, the album can be confidently recommended.