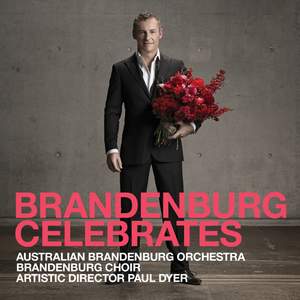 Jamie Hey is the soloist for Vivaldi’s pint-sized Cello Concerto in A minor, and while there are cleaner, lighter-weighted and more multi-hued [versions], the orchestra’s polished energy and... — Gramophone Magazine, September 2016 More…

Vivaldi: Concerto for cello, strings & continuo in A minor RV 421

Brescianello: Chaconne in A major

The Australian Brandenburg Orchestra marks 25 years of music-making with their new studio recording Brandenburg Celebrates - the latest of many acclaimed albums on ABC Classics that have included five ARIA-Award winners.

The music chosen by Artistic Director Paul Dyer provides a showcase of the history of the ABO as well as displaying the superlative musicianship of both orchestra and choir.

The album presents well-loved masterpieces, including Handel's joyous Coronation Anthem 'Zadok the Priest' and vivacious Concerto Grosso Op. 3 No. 6; it also champions little-known gems from the Baroque era, including concertos by Telemann and Brescianello, played with flair and virtuosity by soloists from the orchestra.

The album concludes with Elena Kats-Chernin's Prelude and Cube, commissioned by the Australian Brandenburg Orchestra on the occasion of their 25th anniversary and presented here in its world-premiere recording.

The work features soprano saxophone as well as the Brandenburg Choir and the period instruments of the ABO. In the words of Paul Dyer, Prelude and Cube 'pays homage to Bach, offering a glimpse into the world of the Baroque and a triumphant celebration of the Brandenburg.'

Jamie Hey is the soloist for Vivaldi’s pint-sized Cello Concerto in A minor, and while there are cleaner, lighter-weighted and more multi-hued [versions], the orchestra’s polished energy and evident joie de vivre make for a thoroughly gratifying listen