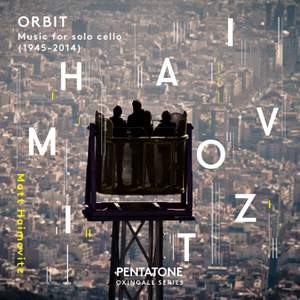 Machover: With Dadaji in Paradise

VI. Why hearst thou music sadly?

VII. Our minutes hasten to their end

VIII. Remembrance of things past

VII. We Are All Mad

Orbit', a three-disc compilation of music for solo cello, all composed between 1945 and 2014 and performed by world-renowned cellist Matt Haimovitz, is the second release in the Pentatone Oxingale Series. In this series, Pentatone joins forces with Grammy Award-winning Oxingale Records, a trailblazing artist’s label since 2000 which is equally committed to revelatory interpretations of the canonic repertoire as to riveting performances of works by recent and living composers.

Alongside his earlier 3-disc compilation on Deutche Grammophon, 'Orbit' establishes Matt Haimovitz as one of the most prolific exponents of solo cello music in our time.

The album documents Matt Haimovitz’s musical journey since the turn of the millennium, together with his partner in life and music, composer Luna Pearl Woolf. It contains nearly all of the solo contemporary works that were initially released on Oxingale Records as five thematic albums ⎯ Anthem (2003), Goulash! (2005), After Reading Shakespeare (2007), Figment (2009) and Matteo (2011), as well as two newly recorded tracks: Philip Glass’s 'Orbit' and a new arrangement by Luna Pearl Woolf of the Beatles’ 'Helter Skelter'.

More than twenty composers are represented in this set, fifteen of them still living, and ten works are recorded for the very first time.

This impressive solo cello odyssey offers the listener a fascinating kaleidoscope of musical influences from the past sixty years, encountering a variety of composers who range in musical style from vanguards Elliott Carter and Philip Glass to young, rock ‘n roll-influenced American composers, to the Italian avant-garde of Luciano Berio and Salvatore Sciarrino: a true 20th century Tower of Babel.