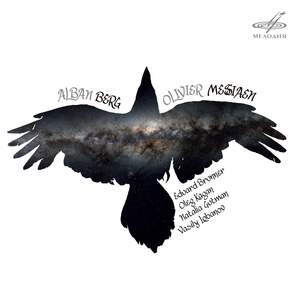 II. Vocalise, for the Angel who Announces the end of Time

V. Praise to the Eternity of Jesus

VI. Dance of Fury, for the Seven Trumpets

VII. "Tangle of rainbows, for the Angel who Announces the End of Time

VIII. Praise to the Immortality of Jesus

Four Pieces for Clarinet and Piano (1913) were created by Alban Berg, one of the pupils of Arnold Schoenberg, the founder of the Second Viennese School, in a period of intense creative ascent, a year before he began to work on his opera 'Wozzeck'.

Olivier Messiaen’s Quartet for the End of Time is arguably one of the most amazing pieces of chamber music of the 20th century. It was composed during the composer’s stay in a German prisoner-of-war camp, where it was premiered in January of 1941.

The epigraph to the entire work was inspired by text from the Book of Revelation: “And I saw another mighty angel come down from heaven, clothed with a cloud: and a rainbow was upon his head, and his face was as it were the sun, and his feet as pillars of fire ... and he set his right foot upon the sea, and his left foot on the earth .... And the angel which I saw stand upon the sea and upon the earth lifted up his hand to heaven, and sware by him that liveth for ever and ever ... that there should be time no longer: But in the days of the voice of the seventh angel, when he shall begin to sound, the mystery of God should be finished.”

The works were first performed in the former USSR for the first time in 1998, at the 'Gift to the Vine' music festival in the Georgian city of Telavi. The festival was initiated by two outstanding Soviet musicians – cellist Natalia Gutman and violinist Oleg Kagan. The composer and pianist Vasily Lobanov and Swiss clarinetist, then a member of the Bavarian Radio Symphony Orchestra, Eduard Brunner, both recognized interpreters of contemporary music, were among the participants of the festival.

A year later, the Quartet for the End of Time was performed by the same line-up in Moscow, at Sviatoslav Richter’s December Evenings festival at the Pushkin State Museum of Fine Arts.

The featured recording was made at one of Oleg Kagan's last performances - he passed away prematurely in 1990.