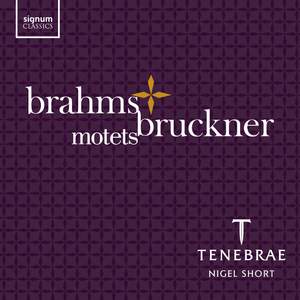 Nigel Short and Tenebrae have come up with a beautifully balanced and contrasted programme…The beauty of sound and dignified expression of intensity that Tenebrae create in the opening of the... — BBC Music Magazine, Christmas 2015, 5 out of 5 stars More…

Brahms: Ein deutsches Requiem, Op. 45: How lovely are thy dwellings

Tenebrae will be launching this new programme of Brahms and Bruckner Motets in the exquisite surroundings and acoustic of St. James’s Church, Spanish Place (Marylebone, London) on Thursday 12th November 2015. Profits from the sale of which will go towards Macmillan Cancer Support to aid their incredible work.

Andrew Mellor, who inspired this project, says, “I have worked with Tenebrae for some years now as a sound engineer/producer for their recordings and I’ve never failed to be astonished by their virtuosity and musicianship. I had always hoped that we would record the Brahms and Bruckner Motets, not only works that I love but pieces very suited to the Tenebrae sound. When my father passed away from cancer I wanted to honour his memory by creating something very special that would live on for thousands to enjoy, while at the same time raising money for Macmillan Cancer Support who do amazing work in supporting those living with cancer. The recording sessions were just as we had all hoped, and the concert in November to launch the album gives us all the chance to hear Tenebrae live in one of London’s most beautiful churches.”

In association with Classic FM and generously sponsored by Edition Peters Ltd., Tenebrae launched a 'Locus Iste' choir competition to perform with them in the concert. To be in with a chance of winning this once in a lifetime opportunity, choirs had to submit a simple audio recording of Bruckner’s ‘Locus Iste’ to be judged by Tenebrae’s Artistic Director, Nigel Short.

Nigel Short adds, “‘Locus Iste’ was probably the very first piece of music by Bruckner I sang when a choir boy and it was a favourite of the whole choir. Its beauty is in its simplicity and understatement and yet, within the short space of this 2 minute piece, Bruckner still manages to venture far and wide harmonically and dynamically, making it something of a little dynamo motet! We are excited to launch the disc together with a guest choir and I look forward to listening to the entries!” Hailed as “one of the country’s most outstanding vocal ensembles” (Evening Standard), award-winning choir Tenebrae blends its passion for singing as if in a large cathedral choir with the breath-taking precision of a chamber ensemble. Tenebrae’s ever-increasing discography has brought about discs for Signum, Decca, Deutsche Grammophon, EMI Classics, LSO Live and Warner Classics, with the choir’s recent recording of Russian Orthodox music being launched on its own label, Bene Arte, receiving glowing reviews and reaching number 1 on the UK Classical Chart.

Nigel Short and Tenebrae have come up with a beautifully balanced and contrasted programme…The beauty of sound and dignified expression of intensity that Tenebrae create in the opening of the first choral number, Bruckner’s Virga Jesse, would be impressive in themselves but with the ear prepared by the first Aequilis the effect is even more telling…what superb singing: technically immaculate, somehow lucid and voluptuously beautiful all at the same time.

[Tenebrae] submit with impressive stamina and unfailing intonation to Bruckner's instrumental scoring and phrasing, which take little account of singers' reqirements for rest and oxygen…a pair of Bruckner's Aequali frame the programme, nobly done by three London orchestral trombonists and recorded to take full advantage of the acoustic of London's Temple Church

Tenebrae, one of the finest choirs in Britain, turn their attention to this collection of Brahms and Bruckner, something to which they're ideally suited. British choirs have a distance from this music that means they don't have the baggage of their German counterparts and so can sing it with an airy distance and more of a feel for the lightness in the music, which is there if you look for it. From rich bottom to airy top, Tenebrae find it, suffusing this music with rich beauty and a lovely sense of wholeness … The richly resonant acoustic of London's Temple Church undoubtedly helps, giving great life to the sound, captured brilliantly by producer Andrew Mellor, whose idea the disc was. Nigel Short's direction of the choir is first rate

Any recording by Tenebrae and Nigel Short will always be top drawer … The choir, as ever, is on fine form.

Performances are everything we’ve come to expect from Tenebrae.

If you wanted proof that the vocal ensemble Tenebrae is one of the most impressive professional chamber sized collectives around at the moment then it’s just arrived … every one of Bruckner’s dynamic extremes is met with ease … impressively this chamber choir equals or surpasses the best of the big choruses to have recorded these motets … stunning singing, fine recorded sound