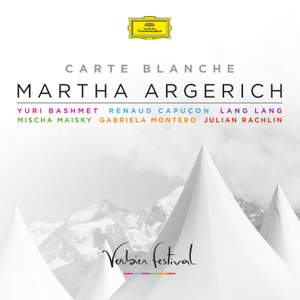 As soloist, Argerich’s tender reading of Kinderszenen is almost beyond compare, displaying an astonishing ability to turn the piano into a singing instrument in every bar. — Fanfare, September/October 2020 More…

Katherine enjoys an evening of chamber music with Martha Argerich and friends.

The first release in Deutsche Grammophon’s new partnership with the Verbier Festival that will see the release of exceptional concerts with great artists (2 sets per year from 2016) recorded by Verbier over the years.

Something special was bound to happen when Martha Argerich was given carte blanche to invite whoever she wanted, to play whatever she and they chose at her Verbier Festival concert on 27 July 2007. She was the life and soul of the party, playing in seven works and making a rare solo appearance in Schumann’s Kinderszenen. Argerich’s artistic partners are Yuri Bashmet, Renaud Capuçon, Lang Lang, Mischa Maisky, Gabriela Montero, Julian Rachlin in a killer programme.

An uproarious encore was given by Gabriela Montero improvising a tango version of “Happy Birthday” (for Mischa Maisky’s daughter Lily Maisky).

This release offers over two hours of exceptional music-making with an enviable line-up of colleagues is now re-created on these two CDs.

As soloist, Argerich’s tender reading of Kinderszenen is almost beyond compare, displaying an astonishing ability to turn the piano into a singing instrument in every bar.

It is thanks to the microphones at festivals like Verbier that we have so many new recordings from Martha Argerich. Not that anybody will need to be reminded these performances from 2007 were live. With Argerich at the piano, “live” is the word, whether in high-octane Bartók...or a tingling account of Beethoven’s “Ghost” Trio.

There are so many good things to hear here, all given the extra frisson of live performance, that it's hard to pick a favourite, although mention must be made of Lutoslawski's Paganini Variations, with Gabriela Montero on first piano. Montero also supplies the encore...It brings the house down. What a night indeed!

For an artist who is almost as well known for her intensely private, almost reclusive nature, Argerich comes across as the most gregarious musical personality imaginable on these recordings, which burst with convivial spirit and the sheer joy of making music with true friends...A joyous, life-affirming set of performances where the whole is most definitely more than the sum of its considerable parts – A-list soloists they may all be, but these recordings are all about collaboration at its finest.