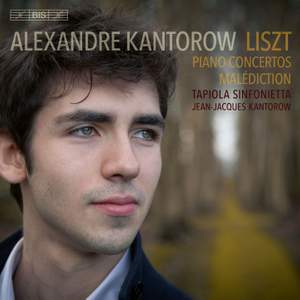 The two numbered concertos, which Franz Liszt revised extensively before letting them be published some 25 years after their conception, frame the single-movement Malédiction for piano and strings which Liszt composed in 1833 and revised in 1840, but which was never published in his lifetime. Stepping into Liszt's shoes for the present recording is Alexandre Kantorow. Born in 1997, Alexandre is here supported by his father Jean-Jacques Kantorow conducting the Tapiola Sinfonietta, a team with a number of highly acclaimed recordings to their credit. The recording is Alexandre’s first for BIS, as well as being his début concerto disc, and represents a remarkable achievement by a hugely promising talent, as well as being a vibrant and exciting account of three impassioned scores.

Kantorow's approach rejects bombast in favour of an equable, mellow-toned artistry that's admirable in itself…Kantorow's way with [the Second Concerto], at once powerful and lucid, convinces strongly, and throughout he is supported by orchestral accompaniments - the Tapiola Sinfonietta conducted by Kantorow's father Jean-Jacques - of top-flight alertness and precision.

Kantorow has a marvellous leggiero touch, but when Liszt asks for con furore, ffff avec enthousiasme, il più presto possible, then Kantorow does not hold back with thrilling bravura, aided by the exemplary support of his violinist-conductor father…it is hard not to be impressed by Kantorow in the concertos, but the Malédiction is why you should buy the disc.

Everything here is dramatic and intellectually probing. One feels the tug at musical language and our heartstrings.