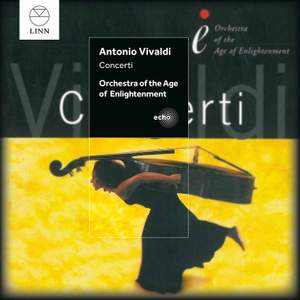 Orchestra of the Age of Enlightenment

The popular Orchestra of the Age of Enlightenment presents a fantastic and exuberantly played selection of Vivaldi.

Originally released in 2000, 'Vivaldi: Concerti' has been re-issued as part of Linn’s ECHO series which offers a second chance to enjoy the best of the label’s award-winning catalogue.

The concertos assembled on this disc afford the listener a glimpse of Vivaldi’s originality, not only as a sensitive colourist and master of form, but also as a felicitous melodist whose harmonies and phraseology are charged with heady atmosphere.

The dancing rhythms and distinctive characters of these concerti, together with the variety of instrumental combinations and sparkling performances, make this a fresh and constantly engaging listen.

The Orchestra of the Age of Enlightenment (OAE) is a resident orchestra of the Southbank Centre, London and associate orchestra at Glyndebourne Festival Opera. The leadership is rotated between four musicians - Alison Bury, Matthew Truscott, Kati Debretzeni and Margaret Faultless. Alison and Margaret share leader duties on 'Vivaldi: Concerti'.

The OAE has worked with some of the world’s greatest conductors across a wide range of music including Iván Fischer, Mark Elder, Robin Ticciati, Charles Mackerras Simon Rattle and Marin Alsop. Based at King’s Place in London and with residencies at the Southbank Centre and Glyndebourne, the OAE is at the heart of the UK classical music scene. They tour regularly with recent concerts in Birmingham, Bristol, Newcastle, Bradford-on-Avon, King’s Lynn, Brighton, Manchester, Bath and York.