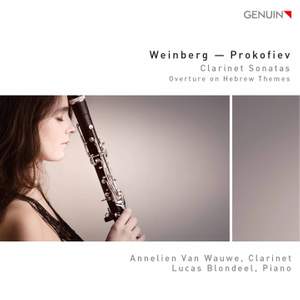 That Annelien Van Wauwe is rightly one of the most highly demanded young clarinetists is not only shown in her victory at the 2012 ARD Music Competition. On her debut GENUIN CD, recorded with the equally internationally award-winning pianist Lucas Blondeel, the Belgian demonstrates her great skill in a wonderfully united program. In addition to Prokofiev's scintillating D major Sonata, Annelien Van Wauwe presents works with a Jewish background: both in Weinberg's much too rarely played sonata as well as in Prokofiev's Hebrew Overture her clarinet sings, she sobs and shouts, without ever losing her noble foundation. Absolutely worth listening to!