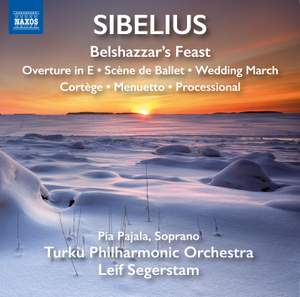 The lesser pieces here are all attractive...Segerstam has become one of the very finest Sibelius conductors, and his Turku orchestra rightly plays as if these were all major works, making this... — BBC Music Magazine, October 2015, More…

Sibelius: Wedding March for Act III of Adolf Paul's play 'The Language of the Birds'

Alongside the great symphonies and tone poems, music for the theatre played an important rolê in Sibelius’s development. From exquisite nocturnal tranquility to the macabre ‘Dance of Life’, Belshazzar’s Feast is an exotic tale of seduction and tragedy to which Sibelius responded with some of his most hauntingly beautiful writing for the stage. The early Menuetto and lively Cortège were considered good enough by the composer to be recycled for further stage productions, while the Overture in E and Scène de Ballet started life as Sibelius’s first attempt at composing a symphony.

This is the second of a six-volume set of orchestral works by Jean Sibelius which explores his prolific but infrequently-heard work beyond the core oeuvre of the symphonies, violin concerto and tone poems. Conductor Leif Segerstam has been acclaimed for his many recordings with numerous orchestras, and was awarded the annual Finnish State Prize for Music in 2004 and in 2005 the highly esteemed Sibelius Medal. His recordings for Naxos include a “skillfully and sweepingly paced” Wagner’s Tristan und Isolde (Classic FM on 8660152-54), his conducting of Alban Berg’s Wozzeck regarded as “a giant-killer” (Gramophone on 8660076-77). The Turku Philharmonic is a platinum record-making and award winning orchestra, and we are confident that the sheer quality of this new series will guarantee wide interest in the relatively neglected works of Finland’s greatest and most influential composer.

The lesser pieces here are all attractive...Segerstam has become one of the very finest Sibelius conductors, and his Turku orchestra rightly plays as if these were all major works, making this highly recommendable.

Segerstam directs all this material with unfailing perception and secures some commendably watchful playing from his excellent Turku band. Sound, too, is undistractingly truthful, full-bodied and atmospheric, and there are useful notes by Dominic Wells. Roll on the next instalment!