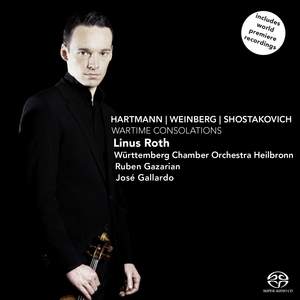 Shostakovich's Unfinished Sonata for Violin and Piano - the complete and massive double exposition of the first movement of what would have been a grand-scale work along strict classical lines - was composed in June of 1945. Manashir Lakubov writes in the introduction of the score (published by the Dmitri Shostakovich Archive in 2012) that the sonata-movement contains a particularly strong link to the Tenth Symphony.

The 'Concerto funebre' began life in a particularly dark period of Karl Amadeus Hartmann's. Freedom, indeed humanity, seemed under siege in the late summer of 1939. In this climate, Hartmann set out to write a funereal piece for string orchestra in one movement. Just a few months later it had morphed into the four-movement Violin Concerto - the profound and deeply personal 'Concerto funebre'.

Following his acclaimed Britten/Weinberg Violin Concertos release (CC72627), a Gramophone Editor's Choice, Linus Roth continues his survey of Mieczyslaw Weinberg's valuable violin output with two works: the Concertino for Violin and Strings, written during the composer's summer holidays in 1948, and from around the same time the Rhapsody on Moldavian Themes op.47. The lyrical sweep and tender gracefulness of the former are magnificent, offset by the (partially) upbeat and romantic disposition of the latter, reminiscent of the music of Aram Khachaturian.

[Weinberg's] delicate Concertino steals the show in Linus Roth's elegant and tender performance. The opening melody is a lyrical gift from God.

They make a complementary pair - the Hartmann more angular and unpredictable, the Weinberg more lyrical and whimsical, each one inventive, deeply felt and thoroughly distinctive…Roth shows musical intelligence and violinistic proficiency in equal measure. The accompaniments are excellent, and it all makes for an eminently collectable disc.

The fascinating find here is an unfinished Sonata for Violin and Piano by Shostakovich, never before recorded: five and a half minutes in which a wistful waltz transforms itself into a brittle pre-echo of the Tenth Symphony. Linus Roth brings to it an intense, deep sonority.